A planet which is of similar proportions to Jupiter, exerts a slight Gravitational pull on its parent star. This causes the parent star to “wobble” and the velocity of this wobble depends on the mass of the planet and the distance at which it orbits from the parent star. Currently, velocities of giant planets have been measured in the region of 1-100m/s.

The motion can be detected by using the Doppler effect, due to the motion having an effect of the spectrum of light emitted from the star. As the planet moves towards the point of observation, (in this case the Earth) the parent star is further away which stretches the wavelengths out and shifts them towards to red end of the spectrum; red-shift. The reverse happens as the planet moves away from the Earth; the parent star is closer to the Earth, compressing the wavelengths of emitted light and shifting them towards the blue end of the spectrum; blue-shift. Because of the small velocities involved the effect is only subtle and can therefore only be detected on very sensitive, high precision astronomical instruments. With the effect being so subtle, the apparent colour of the star also remains unchanged.

The shifts in the spectrum are called Doppler Shifts, giving the method its name. Measurements of the stars spectrum are taken over time and then studied to see if these shifts indicate the presence of a planet. To measure a star’s spectrum, it can be observed through a cell of iodine gas. The radial velocity can be measured by comparing the measured wavelengths of the known spectral lines, in this case the Iodine, with the wavelengths of laboratory experiments. The iodine superimposes many lines on the star’s spectrum so we can measure the wavelength (or velocity) of the star’s lines relative to those of the iodine. By convention, a positive radial velocity indicates the object is receding and if the sign is negative, the object is approaching.

Theoretically it is possible to deduce the size of a planet from the radial velocity measurements, as a larger planet would have a larger gravitational pull and therefore cause a greater radial velocity of its parent star. By creating a graph of the radial velocity recorded versus time, a sine wave is produced. By using the star’s mass and the measurement from peak to peak, it is possible to work out the distance of the planet from the star (Planet’s Orbital Radius). From the amplitude of the curve we can work out the planets mass. The following equations are used in these calculations:

Velocity of the Planet

Mass of Planet from Conservation of Momentum,

From looking at the graph in the diagram above,

. However, we only actually know the mass in terms of its orbital inclination ,i, as we are measuring V* in terms of K and not directly. This will give the Planet's minimum mass. The only time that an exact mass can be calculated is if i=90°, as sin90°=1. This occurs when the planet is eclipsing or transiting. 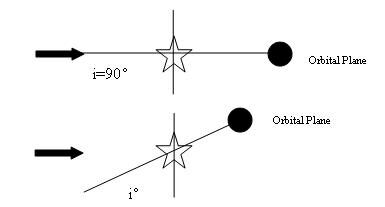 The precision of current surveys using this method is now 1m/s. Jupiter causes the Sun’s velocity to vary by 12.5m/s. All nearby, bright Sun-like stars are good targets for this method as they are relatively inactive and have lots of lines of spectra. However, the method is limited to gas planets and larger, so not Earth like planets. This is because as the orbital period increases, the method becomes insensitive to planets less massive than Jupiter. The length of surveys limits the distances that planets have been found from stars. For example, The surveys started in 1989 setting the upper orbital period limit, so Jupiter with a orbit or 12 years would only just have been discovered. Saturn with its 30 year orbit would still remain undetected.

Community content is available under CC-BY-SA unless otherwise noted.
Advertisement